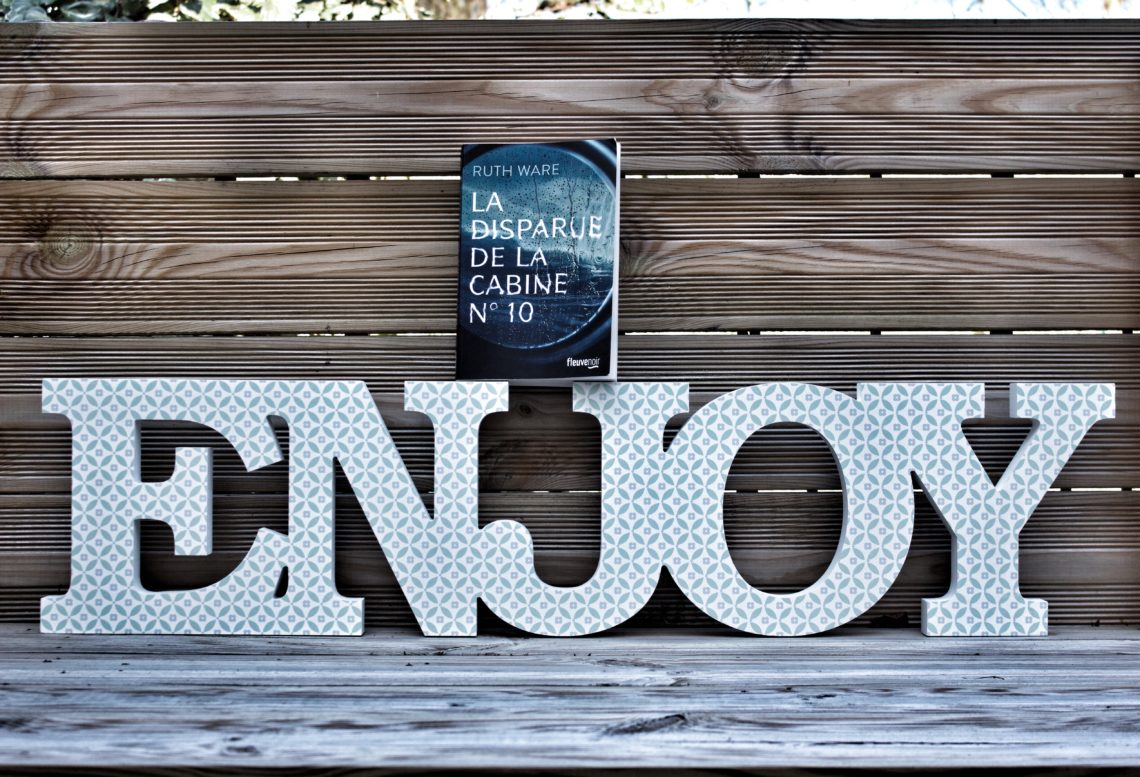 The psychological thriller « The woman in Cabin 10 » by Ruth Ware takes you into an investigation in which you will suspect each character.

Ruth Ware is an English author who has become the queen of psychological thrillers with her first novel « In a Dark, Dark Wood ». « The woman in Cabin 10 » is her second novel.

This was meant to be the perfect trip. The Northern Lights. A luxury press launch on a boutique cruise ship.

A chance for travel journalist Lo Blacklock to recover from a traumatic break-in that has left her on the verge of collapse.

Except things don’t go as planned.

Woken in the night by screams, Lo rushes to her window to see a body thrown overboard from the next door cabin. But the records show that no-one ever checked into that cabin, and no passengers are missing from the boat.

Exhausted and emotional, Lo has to face the fact that she may have made a mistake – either that, or she is now trapped on a boat with a murderer…

I am a big fan of Agatha Christie. So when I found this book and saw that The Sun said it was a meeting between Agatha Christie and The Girl in the train, I was excited. However, after reading it, I have mixed feelings.

The plot in « The woman in Cabin 10 » is cut into 8 distinct parts. Each part represents a stage in the story: Part 1 is an introduction, Parts 2 to 5 represents the investigation and Parts 6 to 8 is where the story unfolds.

+ The introduction: This part is a kind of introduction before the story really begins. We discover the main character, Laura Blacklock, during the burglary of her apartment. This first part retraces the days before her trip. I confess that I found it too long and not very interesting. To wait 60 pages before getting on the boat … it’s long. I was relieved when I arrived at Part 2.

+ The investigation (main plot): When Laura embarks on the Aurora Borealis Yacht, the plot begins. The first night of the cruise, she hears the passenger from Cabin 10 being killed. From this moment on, the reader finds himself immersed in a closed-door investigation like Agatha Christie’s. Laura did not see the body or the murderer and nobody is missing on the boat. We find in this plot all the characteristics of an effective psychological thriller. Ruth Ware has really built her plot and she will make you doubt all along the book. I found myself suspecting the 10 passengers of the Aurora (apart from Laura obviously) and the crew members. In this part of the book, you do not get bored. There are many twists that revive the investigation and your imagination.

+ The outcome of the plot: There is a twist about 140 pages before the end. It is at this moment that the resemblance with Agatha Christie stops. I will not go into detail to not spoil you. Personally I thought it was a little early for that twist. I found these 140 pages a bit long for my taste. However, I must admit that I did not expect it at all.

Characters is a delicate subject for me. I hated the main character but found that the other characters were well described:

+ Laura Blacklock: Laura is a journalist for a travel magazine. And I must say that from the first pages, I could not stand her. She is negative, selfish and has a strong tendency to complain all the time. Laura takes drugs and drinks a lot. She does not have an ounce of humor in her. Throughout the investigation, she will be very unpleasant and stupid. At the end, I told myself that if the killer killed her, he was doing me a favor (I know it’s bad). I confess that this character ruined the story for me. Fortunately, the plot is interesting.

+ The passengers of the Aurora Borealis: I will not go into the details of each characters to not spoil you. Basically, there are 11 passengers in the Aurora (counting Laura). The passengers are well described and they mostly all have a role to play in the plot. The only complaint I can make is that some of the passengers do not play a huge role in the story. They do not participate very much in the investigation which is a pity because there is only 11 of them.

Laura has a boyfriend who stays in London. So there is no real romance in this novel. Personally, given the story I find it logical.

The end of « The woman in Cabin 10 » was a surprise to me. I did not expect that. So the plot is successful. Am I happy with the outcome? Frankly, I can not decide. Maybe I would have liked to understand better the murderer’s personality. A feel like it went a little to fast.

Personally, I mildly appreciated « The woman in Cabin 10 » by Ruth Ware.

+ The fact that I did not expect the ending

+ The different passengers on the Aurora (apart from the main character)

+ The main character (Laura Blacklock) who is insufferable

+ I would have liked a longer investigation (to avoid learning the outcome of the story 140 pages before the end).

If you are searching for a good thriller, I recommend: My Sister’s Grave