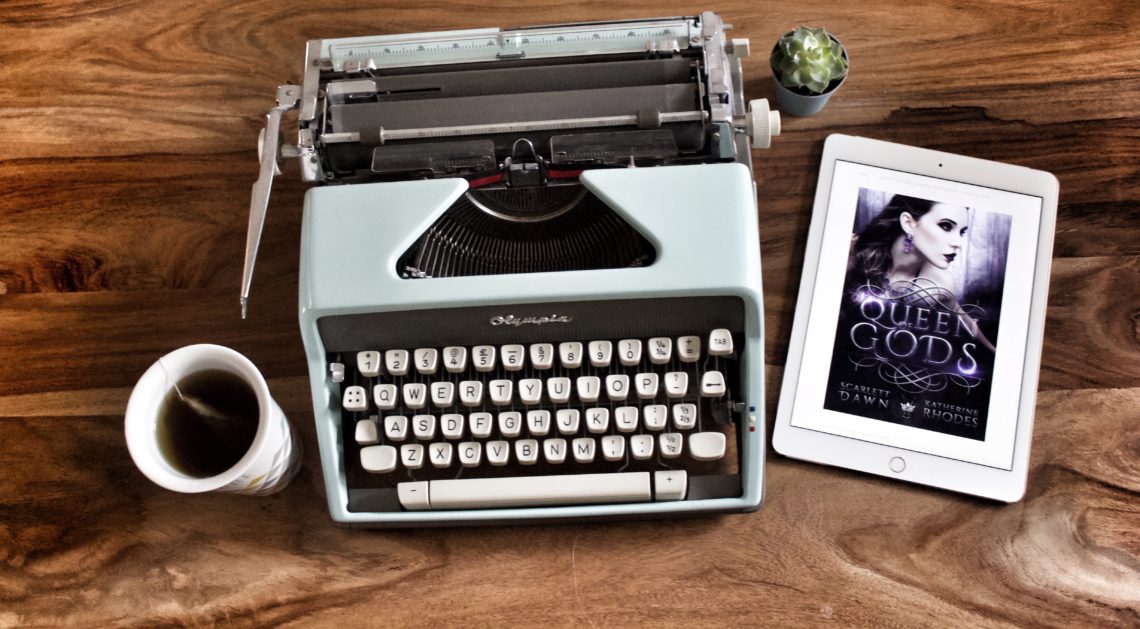 In « Queen of Gods » by Scarlett Dawn and Katherine Rhodes, you will discover the political warfare in the Vampire kingdom.

Magic is life.
Bound to S’Kir, the Unseen Gods wait to reunite with their brethren. Only an ancient prophecy keeps their hope alive.

Blood is life.
Locked away from S’Kir on earth, the Vampire Overlords and an Original Druid hold their crowns with brute power. The Law is all that keeps their savage nature hidden.

Until one defiant vampire is awakened early from her Rest and summoned to the vampire stronghold. In her wake, all hell breaks loose…

What did I think about « Queen of Gods »? Good question. I have mixed feelings about this one: there are things I loved and others not so much.

« Queen of Gods » is divided into two stories. For me, that’s the problem. There is one story I loved and another that I di not like:

+ The story about the reign of the vampires: In this story that takes place on earth, we follow Gwynnore who was chosen by the vampire overlords to be the next vampire queen. However, before being queen, she must succeed the various tests and survive the political games. Moreover, she must bear the man named to be her king.

I loved this story because:

1. The personality of the main character is great because she is rebellious, funny and intelligent

2. Vampire politics is complex and hides many secrets

3. The dialogues between the 5 vampire overlords and Gwynnore are well written and funny

+ The story of the Druids stuck on S’Kir: This story is told by Kimber, a young druid who discovers through magic that the breaking time has arrived. This could restore a connection with the vampire world. However, not all druids are happy with the arrival of this change.

I liked this story less because:

1. The main character (Kimber) is disappointing. I did not get interested in Kimber. It may be because next to Gwynnore, she is unfortunately dull.

2. The plot is not bad but less engaging than the vampires.

+ Gwynnore: She is a very powerful vampire who has just been named future vampire queen. This character is exciting and unpredictable. She will not let anyone boss her around. I loved this character who reminds me of the other characters of Scarlett Dawn.

+ The 5 vampire overlords: I find ressemblance between those characters and those of Scarlett Dawn. These ancient vampire kings are brutal and intelligent. This ruthless side makes them great. I have a big preference for Lord Belshazzar, you will understand why by reading the book.

+ Kimber: Kimber’s character is well written but she did not intrigue me. She is smart young woman but innocent.  Whenever it was her chapter I felt punished.

+ The Vampire story : Gwynnore is stuck between 2 men. Personally, I have my preference (for those who will read the book, my favorite is the first). This romance makes you want to read more. Just for this romance, you should read this story.

The end is a little frustrating because there are still many unresolved issues. We have the impression that everything is going very fast.

I think « Queen of Gods » has a lot of potential thanks to Gwynnore’s story. However, I find that the story could be more elaborate. I recommend it because honestly I will read the second book but I am not 100% satisfied with my reading.

+ Gwynnore’s story
+ The characters in the vampire world
+ The Romance

What fantasy book are you reading right now ?