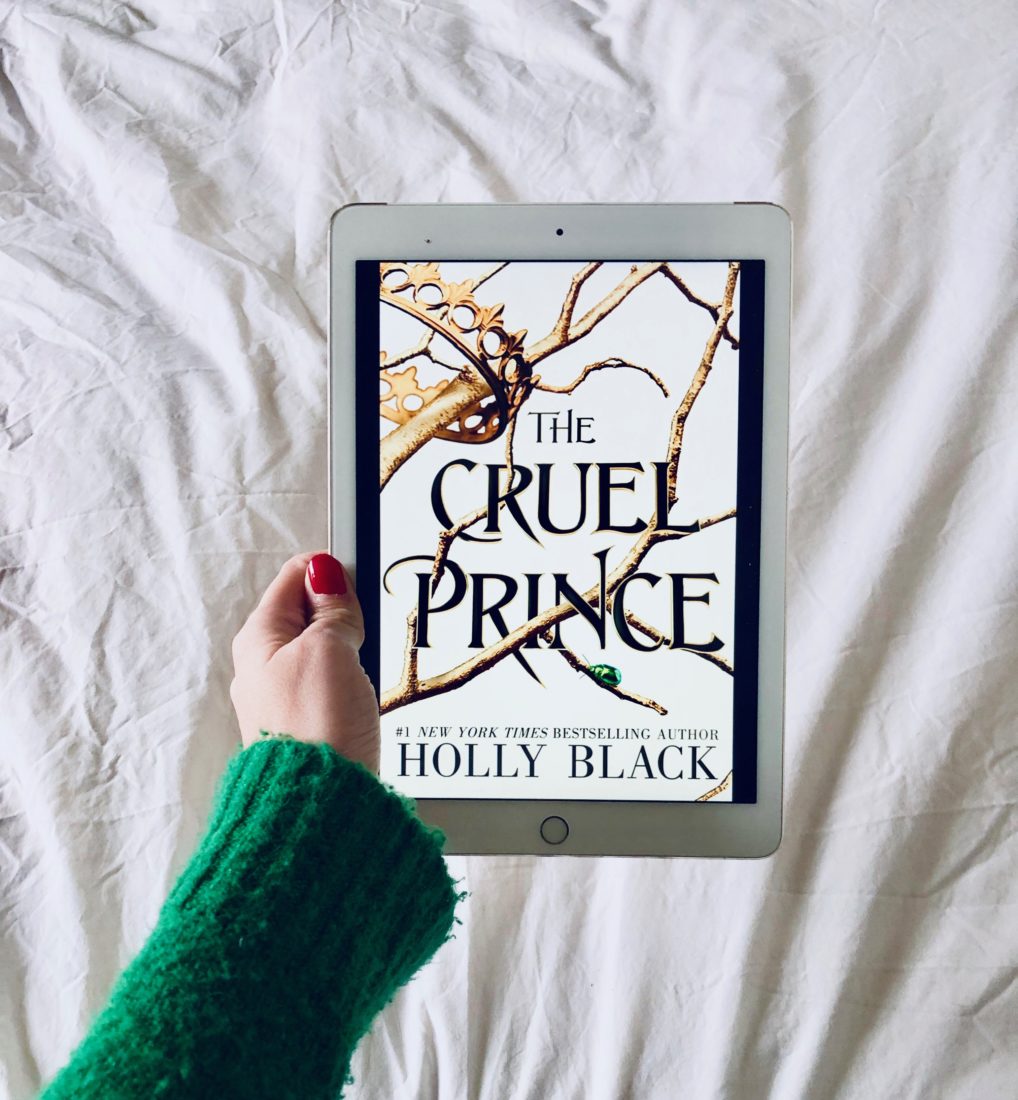 Good morning, everyone! I just finished the book « The Cruel Prince » by Holly Black. This Young Adult book is very popular in the US. And now I understand why. If you love ruthless heroines and the kingdom of fairies, you will love it.

Holly Black, is a fantasy best-selling author. « The Folk of the Air », of which The Cruel Prince is the first volume, is not her first fantasy series. Her first novel (« Tithe: A Modern Faerie Tale »), was published in 2002.

Of course I want to be like them. They’re beautiful as blades forged in some divine fire. They will live forever.

And Cardan is even more beautiful than the rest. I hate him more than all the others. I hate him so much that sometimes when I look at him, I can hardly breathe.

Jude was seven years old when her parents were murdered and she and her two sisters were stolen away to live in the treacherous High Court of Faerie. Ten years later, Jude wants nothing more than to belong there, despite her mortality. But many of the fey despise humans. Especially Prince Cardan, the youngest and wickedest son of the High King.

To win a place at the Court, she must defy him–and face the consequences.

In doing so, she becomes embroiled in palace intrigues and deceptions, discovering her own capacity for bloodshed. But as civil war threatens to drown the Courts of Faerie in violence, Jude will need to risk her life in a dangerous alliance to save her sisters, and Faerie itself.

1 / Why I hesitated to read it

After many American bloggers kept talking about this series, I became interested by « The Cruel Prince ». I must admit that I was very hesitant to start this book, Young Adult is not my favorite genre. I have the impression that this genre is capable of the best (ex: Throne of Glass) as well as the worst (ex: Fallen). All these reasons explain why I waited a year to read this series.

Reading the summary, I wasn’t thrilled either. The theme of « The Cruel Prince » is the faery world. I was afraid of falling back into yet another stereotype of a faerie court: the deadly girl must be saved by the handsome and dark prince of fairies.

The Court of Faerie theme is becoming more and more common in the Young Adult genre. As you know, the appearance of fairies in literature is not new. The first representation dates back to the medieval period, thanks in particular to the poems of Marie de France. Another very famous representation of the fairy kingdom is William Shakespeare’s, in his work « A Midsummer Night’s Dream ». There are many other examples of course. Personally, I have a lot of expectations when I read a book with this theme.

Well, after I told you all this, I must admit that I did the right thing by reading this book because I loved it ! Unlike most Young Adult books, this book is very dark. Although the beginning made me hesitate (the plot takes time to really start), I quickly realized that this story is a power struggle where every wicked action is allowed (betrayals, manipulations, etc…).  If you like heart warming romance, this book is not for you.

We discover Jude, Taryn (her twin) and Vivi (her older sister), 3 sisters who will discover the world of fairies after seeing their parents killed. The murderer (their mother’s previous husband) brings them back with him to the fairy world to raise them.

As she grows up, Jude understands the political game in the fairy kingdom: The Great King has ruled for centuries, but his people think it is finally time for him to retire and give the crown to one of his children. In this world, the king chooses his successor. It does not automatically go to the eldest child. And the Great King has six children waiting for him to make his choice. The future of the kingdom being uncertain, Jude decides to play a very dangerous game. Intrigues and deceptions, here she comes.

Prince Cardan is the King’s youngest son. He’s cruel, charming, and intelligent. He and Jude will always be at war with each other. This series is a merciless chess game between these two characters.

I love on both main characters:

♥ Jude is ruthless and full of flaws. But that’s precisely what makes her great. She has always wanted to be accepted by fairies, but as it seems impossible, she decides to become as deceitful and implacable as them. Despite this, she remains deeply human and endearing.

♣ Cardan was a little disappointing at the beginning of the book. He was very cruel to Jude for no reason. But little by little, the character became endearing. Cardan is a man who lives only for his own pleasure (alcohol, woman, food) but be careful not to underestimate him. He will be a very good opponent for Jude.

However, I hated Jude’s twin sister Taryn. She’s a selfish simpleton who doesn’t deserve Jude’s love. She’s the only character I’ve regretted in this book. The rest of the secondary characters are very well-written.

As I told you, the plot takes time to really start. But little by little, you will discover that this book is full of twists and turns and political games. Once the main plot is launched, you will not be bored. I devoured this book and followed it up with the second one (which is even better). This series has enormous potential.

In short, this series contains more manipulation, political games and betrayals than romance. That’s why it’s one my favorite book in 2019 (you’re going to tell me that it’s a little early to declare that).

What you must remember …

♥ The main characters Jude and Cardan

♥ The world of fairies, described as a merciless world

♥ The plot that’s not a Young Adult cliché. This book is dark and there is no good and bad.

♠ The plot takes time to start

♠ After reading the second volume, I can’t say that the first volume is perfect. It is a first step towards the evolution of our characters. They will really become ruthless in the second volume. Basically, this volume is very good but the second one is even better.

Have you read this book? Do you have a favorite Young Adult book? If you like this genre, You should check out my article on  « The Queen of Tearling » by Erika Johansen.

Have a good week 🙂