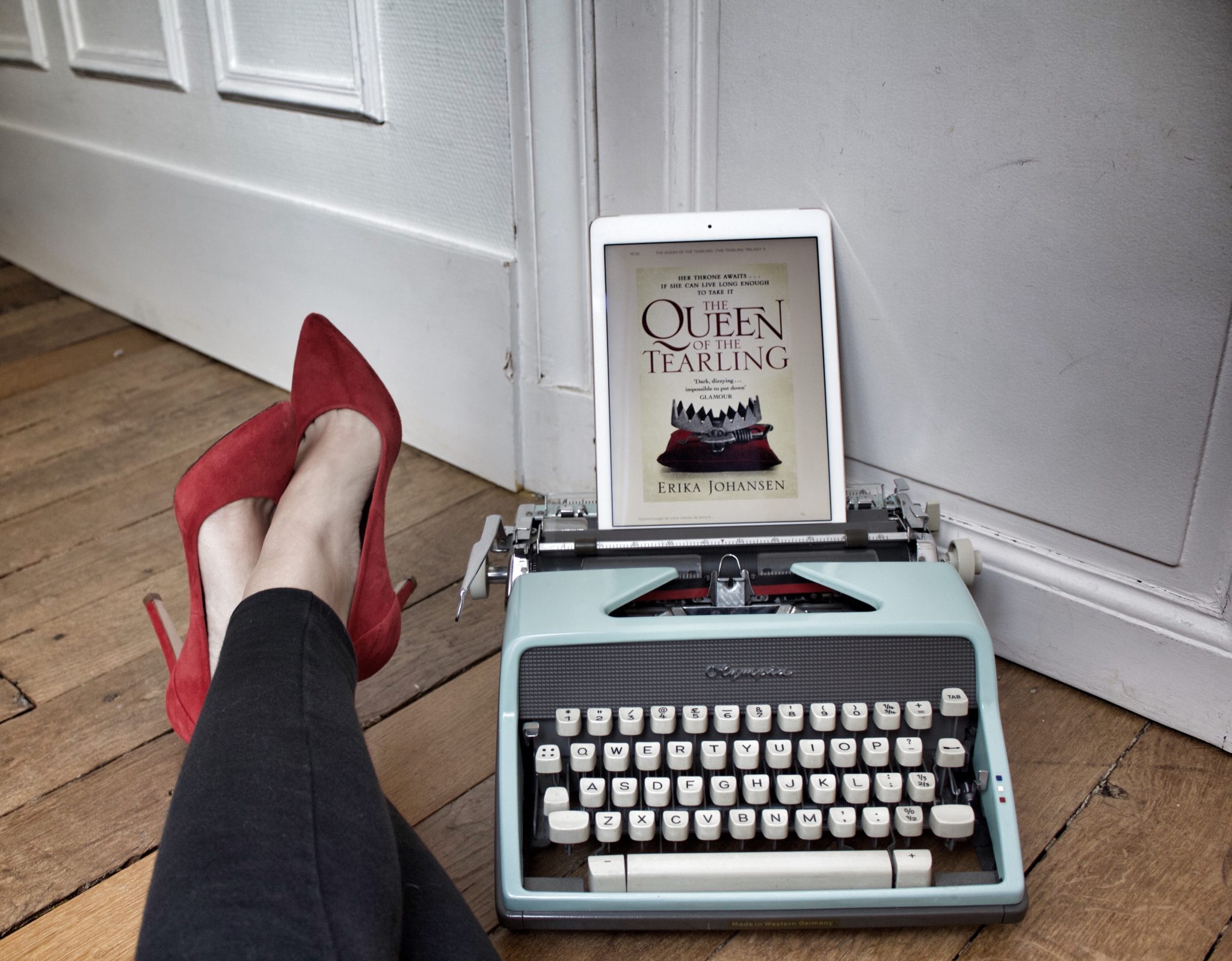 The Queen of the Tearling – Erika Johansen

The fantasy book « The Queen of the Tearling » by Erika Johansen really surprised me. I recommend this book that describes the ascension of a young queen whose country is in crisis.

Erika Johansen is an American author who grew up in San Francisco. She is very discreet about her life. She is a lawyer and passionate about writing. For now, she wrote only the Tearling trilogy.

Kelsea Glynn is the sole heir to the throne of Tearling but has been raised in secret after her mother – a monarch as vain as she was foolish – was murdered for ruining her kingdom. For 18 years, the Tearling has been ruled by Kelsea’s uncle in the role of Regent however he is but the debauched puppet of the Red Queen, the sorceress-tyrant of neighbouring realm of Mortmesme. On Kelsea’s nineteenth birthday, the tattered remnants of her mother’s guard – each pledged to defend the queen to the death – arrive to bring this most un-regal young woman out of hiding…

And so begins her journey back to her kingdom’s heart, to claim the throne, win the loyalty of her people, overturn her mother’s legacy and redeem the Tearling from the forces of corruption and dark magic that are threatening to destroy it. But Kelsea’s story is not just about her learning the true nature of her inheritance – it’s about a heroine who must learn to acknowledge and live with the realities of coming of age in all its insecurities and attractions, alongside the ethical dilemmas of ruling justly and fairly while simply trying to stay alive…

Initially, I was not excited by this book: Another story about a pretty princess who will become queen and find a prince charming (instant love). She will be super innocent, there will be hardships to overcome and it will end by a happy ending.

And not at all …. this book is very addictive and not at all innocent. I do not consider it a « young adult » because there is a lot of violence.

We discover Kelsea, princess hidden at birth by the Queen’s Guards. At the age of 19, her mother’s old guards came to bring her back so that she could become the queen of the Tearling. Her adoptive parents have prepared her for that date.

Through this story, Erika Johansen introduces us to the geopolitics of this world. For 19 years, the country named Tearling has been ruled by the regent (Kelsea’s uncle). His management is deplorable. Since the signing of the treaty, the Tearling is crushed by his neighbor the country of Mortmesne. Mortmesne is led by the Red Queen, a queen who terrifies her people. The political situation of the Tearling is captivating. For me, this is really the main strength  of the book. « The Queen of the Tearling » plunges us into a violent and complex world.

Kelsea finds herself becoming the queen of a country that never recovered from the invasion of Mortemesne. The reader will follow Kelsea’s ascent as Queen of the Tearling. She will first have to reach the royal castle to be crowned. Then she will have to choose the people who advise her and who surround her. She will also have to deal with the intrigues of the court and the reality of the black market. During 480 pages, Kelsea will overcome many adventures. « The Queen of the Tearling » held me captive.  I was immersed in this world from the first pages. I had a hard time putting it down before I finished.

This book is written in 3 parts:

+ Part 2: Her installation at the castle and discovery of her people

+ Part 3: Kelsea’s first big action as queen (I’m not telling you anymore to not spoil you)

The story is very detailed and complex. Erika Johansen built the plot around many characters.

In this story, the reader discovers multiple points of view. I counted at least 6 of them. It was interesting to have other points of view than Kelsea’s, like the Fetch’s or the Red Queen’s. However, I find that some could have been avoided. Sometimes it was a bit long.

As I said above, there are a lot of characters. Erika Johansen describes them thoroughly which gives depth to the story. For me, the major characters are: Kelsea, the Mace, the Red Queen, the Fetch.

+ Kelsea is a 19-year-old princess who grew up far from the intrigues of the court and her people. She was raised to be queen. Faced with the terrifying reality of her country, she will have to grow quickly. I love this character because although Kelsea is young she is intelligent and learns quickly. It’s nice to have a heroine whose main strength is not her beauty. She is smart and does not hide behind her guards.

+ The Mace is a of Queen Elyssa’s guard, Kelsea’s mother. He is part of the team that brings Kelsea to her throne. He will quickly become an important person for Kelsea. His advice and actions will be essential for her survival. He is hard and ruthless but essential to the plot.

+ The Red Queen has ruled Mortmesne for more than 100 years. She is considered a witch. The reader finds himself in the place of the red queen several times. She is a terrible character who openly uses sex slaves. Kelsea’s arrival as a queen goes against her plans. She wants to keep the power and she is ready to do anything. But we also discover her vulnerable side (it does not make her more friendly). This first volume introduces this character. But in my opinion we will see much more of the Red Queen in the other books.

+ The Fetch is a character who remains mysterious in this first volume. As leader of the thieves, he has an important role to play in Kelsea’s ascent as queen. We don’t see him a lot in this book, but it really impacts Kelsea and the story. I hope he will play a big role in book 2 and 3.

Honestly, do not read this book for the romance. Kelsea is attracted to Fetch but I’m not sure it will be reciprocal. For me, it’s the part that is missing a bit in « The Queen of the Tearling ». We don’t even have a glimpse at the possible romance that would develop in the next books.

The book does not end with a « cliffhanger »(thank you !). We finish on a first victory for Kelsea. However, we understand that the road is still long. Many questions are not resolved. You’re going to want to throw yourself on the second volume.

Personally, I loved « The Queen of the Tearling » because of its intricate plot, ruthless world and captivating characters. I also liked that this novel is not a typical princess story. The only downside is maybe the lack of romance. It did not bother me much but I would have liked to have glimpse of the romance that would develop in the other books.

If you want to read a story about the ascension of a queen facing war-torn country, this book is for you. You will love the rules and intrigues of the court as well as the main players within the Tearling policy.

+ do not look for romance