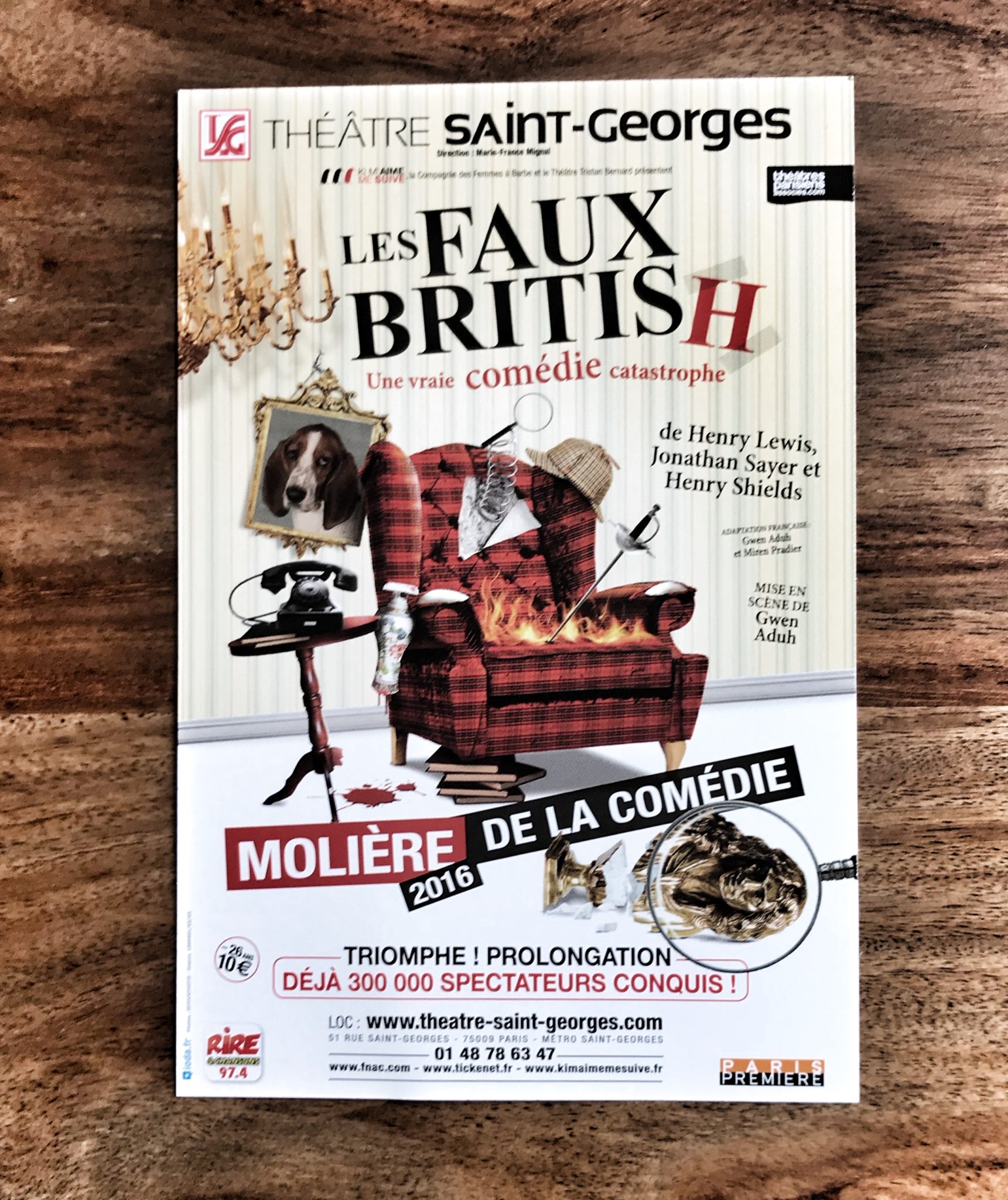 Hello everybody ! Today, I’m going to talk about the play « Les Faux British ». A hilarious police investigation, between Sherlock Holmes and Agatha Christie. If you’re in Paris, you are going to love it.

Summary of the play  …

After their triumph at the Tristan Bernard Theater, Les Faux British continue their murderous investigation in the same whirlwind of catastrophes and with as much madness, but at Théâtre St Georges this time.

Imagine 7 lovers of English black novels who decide to create a show when they have never been on stage! They chose an original piece, a real masterpiece written by Conan Doyle himself (well, that’s what they claim!) … The story takes place at the end of the nineteenth century, in a magnificent manor house. an engagement party in the heart of England. The festivities will finally begin when a murder is committed. Each of the guests present in the castle then becomes … a dangerous suspect.

Our brave « one-night comedians » will soon find out that theater requires a lot of rigor. Despite all their good will, disasters will follow each other at a furious pace. In this merry disorder, our Faux British, armed with the legendary British phlegm, will do everything to interpret as worthily as possible this theatrical thriller that is so close to their heart.

Will they succeed in finishing the play? In what state are we going to find them?

What is certain is that the spectator will never stop laughing at such a succession of gags … so British!

Initially, I was looking for a show to go see with a friend. As we both love the theater, I looked for a popular play. When I read the summary of the play « Les Faux British », they already had me. A Sherlock Holmes comedy is for me. Honestly, I was not disappointed. I can even tell you that it surprised me.

At the beginning of the play, we discover amateur actors who stage a play about a police investigation. Let’s just say that the play does not go as planned. Between the problems with the sets and the really amateur actors, you will not be bored. The staging is so catastrophic that I died of laughter from beginning to end. I was surprised to laugh at the staging of this play and not the police investigation itself. After a while, I paid much less attention to this police investigation. The rhythm of the play and the dialogues are really incredible. I loved the disasters that kept happening.

The actors are really great. They play perfect amateur comedians. They will make you laugh with their mistakes. I especially liked the character of the butler (played by Yann Papin) and the brother-in-law of the victim (played by Yann De Monterno). Whenever the butler pronounced his text badly or was wrong, I died of laughter.

What you need to  remember…

I recommend « Les Faux British » without hesitation. You need to speak a little french to appreciate it.  If you love a show mixing police investigation and a hilarious comedy, this play is for you.